What’s in a name?

The scientific name ‘cannabinum’ means hemp-like and refers to the leaves of this plant thought to resemble Cannabis sativa.

Common names include holy rope, hemp-agrimony, again due to the leaves, and raspberries and cream. The latter, probably due to the pinkish or light purple colouring of the flowers.

However, a number of species of Eupatorium are medicinal. Boneset and gravel root are both indigenous to North America. E. cannabinum is a European species. It is a vigorous plant in the Aude. Boneset (Eupatorium perfoliatum) and hemp-agrimony appear to have similar medicinal uses.

Although E. cannabinum grows and spreads quickly, at least in my garden here in the Aude, it is worth planting as it is loved by the insect world, particularly butterflies. It is a beautiful, tall plant.

In the UK you will find hemp-agrimony in bloom from around June to September. The photographs are from my own garden in the Aude or the surrounding countryside. It is still blooming here at present. On my herb walks it is one I frequently find later in summer.

Culpeper called it bastard agrimony, bastard hemp, water agrimony or water hemp. He utilised it for the drying, cleansing and strengthening properties. A blood purifier. He described it

“… healeth and drieth, cutteth and cleanseth, thick and tough tumours … It helps the cachexia or evil disposition of the body … “ 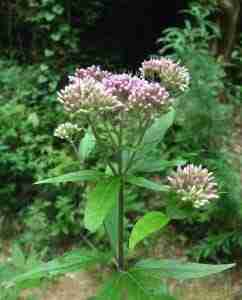 Maud Grieve recommends a tea of dry leaves for prompt relief, if taken hot at the onset, of influenza or feverish chills.

Interestingly, an ethnobotanical study, in 2007, on the usage of wild medicinal herbs in the high mountains of central Serbia included Eupatorium cannabinum. Researchers were surprised to discover E. cannabinum utilised for influenza-like illnesses.

Reputedly, leaves were wrapped around bread to prevent it turning mouldy.

Barker suggests Eupatorium cannabinum is best fresh. Leaves, root and flower-heads used in herbal medicine. It has aperitif, cholagogue and laxative actions as well as being diaphoretic and expectorant. Furthermore, he particularly indicates it for flu with digestive upset and loss of appetite. E. cannabinum strengthens and tones the liver.

This is a plant I have grown to understand much more since growing in my own garden. My first tasting of this plant, as a dried tea, was as a student herbalist. I found it to have a sour but refreshing and cleansing taste linking with the actions. I remember some of the other students found it stimulating to the upper mucous membranes.

It appears to have dropped out-of-favour with many herbalists today. This could be due to the presence of pyrrolizidine alkaloids although it is not a herb one would consider for long-term use. Perhaps it is due to a preference for more exotic medicinals.

… a little bit of science…

As a result of the research conducted on E. cannabinum several pharmacological constituents are noted. Constituents discovered include pyrrolizidine alkaloids, flavonoids and volatile oils (including thymol).

In particular research has studied polysaccharides for the immuno-stimulant action and, sesquiterpene lactones in relation to anti-tumour activity. Furthermore a study in 2014 researched this latter activity against colon cancer cells.

Finally, the research into the anti-tumour activity I find particularly interesting. I wonder if the “cachexia or evil disposition” of Culpeper’s time was, in fact, cancer? We can only surmise.