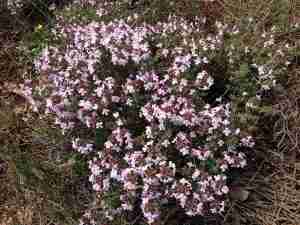 And so to this website’s namesake! During the month of May, the hills around the Aude are covered with the stunning colour of the beautiful thyme flowers. The aroma is luscious.

Thyme has a lengthy medicinal and folkloric history. Grieve tells of it being one of the flowers forming the fairies favourite playgrounds.

In mediaeval times, it was utilised for invigorating and antiseptic properties. The Romans reputedly used it as flavouring for cheese and liqueurs.

Culpeper also used thyme for headaches (see energetics section below). According to Culpeper thyme killed worms in the belly, expelled wind and ridded the body of phlegm, strengthening the lungs. For children he recommended its use in the disease chin-cough.

Thyme is strongly antiseptic (Hoffmann). Hoffmann recommends use as a gargle for sore throats, irritable coughs, laryngitis and tonsillitis. He describes further use for the respiratory tract for cases of asthma, bronchitis and whooping cough. Could whooping cough be the chin-cough from Culpeper’s time?

Weiss actually lists the plant within the respiratory system of his book. He highlights similar actions to Hoffmann adding its use for patients suffering from emphysema.

The action on the respiratory system, especially the lungs, appears to be the main property as Mills too includes it in his list of expectorant herbs. However, Mills also describes an antiseptic effect on the urinary system and an antispasmodic and carminative effect on the digestive tract which is probably why thyme is such a popular culinary herb.

Thyme is also cited by Bartram as being useful for infections of the respiratory and urinary tract and for bedwetting children and overwork.

I find dried thyme a very pleasant winter tea to fight off those winter bugs. To me part of the healing process is inhaling the lovely aroma of the brew. If you are not keen on the taste of the tea consider using in a foot-bath (see below). Even with a foot-bath you would still benefit from that luscious aroma.

Bartram contraindicates use in pregnancy although I have found no support for this claim other than the traditional eclectic physicians believing the herb to be an emmenagogue.

Culpeper actually recommended use during labour for speedy delivery and to bring away the afterbirth. He described it “so harmless you need not fear the use of it.”

The World Health Organisation note safety of thyme preparations during pregnancy or lactation has not been established.

Curtis suggests care with the essential oil as it can have an irritant effect on the skin and mucous membranes particularly if high in thymol or carvacrol.

I personally wonder if the pregnancy concerns were originally raised due to use of essential oil rather than the actual herb. Particularly where the thyme essential oil may be high in phenols. The phenol constituents, such as thymol or carvacrol, would naturally be more highly concentrated in the essential oil.

and some science stuff…

A volatile oil is the primary principle with bitters, saponins and tannins making up approximately 10% (Weiss). Mills also includes flavonoids.

Saponins have a pharmacological effect on the respiratory system and bitters on the digestive system. Flavonoids are antispasmodic, anti-inflammatory and some are anti-tumour. Thyme oil found to inhibit several different fungi and negative bacteria. The volatile oil contains monoterpenes, thymol and carvacrol (Mills).

Monoterpenes are generally antiseptic, bactericidal and antiviral. Some are also analgesic, expectorant, decongestant and stimulant. Phenols (thymol and carvacrol are generally antiseptic, anti-infectious, bactericidal, stimulating to the immune system, activating healing and stimulating to the nervous system making them effective in some depressive illnesses (Clarke).

and a bit more science with some research…

This study is interesting as it chose to look at the anti-spasmodic and analgesic actions in relation to painful periods. A clinical study conducted on 84 university students with primary dysmenorrhea. Students randomly assigned to three groups. They all received capsules and did not know which group they were in.

Three groups split to receive: thyme essential oil, ibuprofen or placebo. Pain intensity identified with a visual scale. Checked before and one hour after each dose for 48 hours after starting medication. Data collected and analysed. Both thyme and ibuprofen were effective in reducing pain severity and spasms (Salmalian et al, 2014).

for those following the Outlander series…

In the first book, on arrival at Castle Leoch, Claire boils thyme with garlic cloves. Cloth soaked in this solution makes an antiseptic bandage for Jamie’s wound.

In the herb garden at Castle Leoch it is mentioned again. Mrs Fitz asks Claire to plant garlic between thyme and foxglove on the south side of the garden.

and a wee bit of energetics…

Culpeper described thyme as under the dominion of Venus and under the sign of Aries. Many of Culpeper’s uses have already been mentioned above. The astrological virtues Culpeper believed chiefly appropriated thyme to the head. He said anointing the head with thyme vinegar stopped pains thereof!

These recipes are from the famous French herbalist Maurice Mességué.

i ) Liqueur: macerate 3 to 4 fresh or dried sprigs (of thyme) in a quarter of a litre (8 fluid oz) of brandy (a teaspoonful occasionally)

ii) Foot-Baths and Hand-Baths: put two to three handfuls into a litre (1½ pints) of water

I’ve just gathered some (images above in jar) so ‘thyme’ to make a tincture…. and perhaps a vinegar or liqueur too…

If you’re interested in learning more about thyme, and perhaps seeing wild thyme flowering, book a local May workshop.