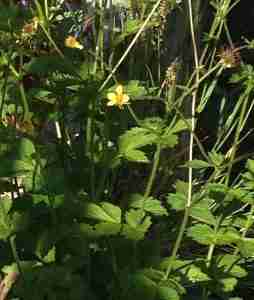 Harold Ward described Geum as a slender, sparsely branched plant reaching a height of one to two feet and preferring hedges, woods and shady banks. It has yellow, erect flowers usually found between May and September.

I usually find Geum growing beside grasses or other wild flowers such as nettles, buttercups or herb-robert. This can make it a little more difficult to single out. The flowers turn into slightly prickly seed-heads. If you look closely in the images on this page you should see some seed-heads. 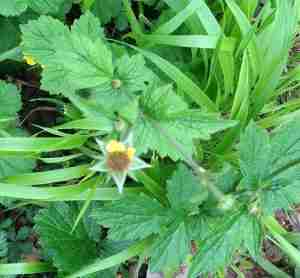 Wood avens was predominately used as a digestive herb for toning action on the bowel. The following quote from the Herbal Manual of herbalist Harold Ward was written in 1936. He lived in Suffolk in England.

“The properties of Avens make for success in the treatment of diarrhoea and dysentery. The tonic effect upon the glands of the stomach and alimentary tract point to its helpfulness in dyspepsia. In general debility continued use has had good results. The astringent qualities may also be utilized in cases of relaxed throat Although wineglass-ful doses three or four times daily of the 1 ounce to 1 pint infusion are usually prescribed, Avens may be taken freely, and is, indeed, used by country people in certain districts as a beverage in place of tea or coffee.”

This last sentence brought a smile as I visualised people sitting chatting round their pot of Geum tea. Ward described the actions of wood avens as astringent, tonic, antiseptic and stomachic. 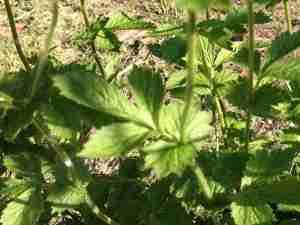 Menzies-Trull notes Geum urbanum contains tannins which give the herb a mild astringency. He adds this is useful for conditions such as dysentery and diarrhoea (as did Ward above). Mills (1993) notes the eugenol content acts as a carminative and antispasmodic in the intestines.

I find this herb to have a slight drying taste in the mouth and this would relate to the tannin content and astringency.

Bremness notes the whole plant is used as quinine substitute. She describes wood avens as useful for fever, diarrhoea, for reducing bleeding and inflammation and as a gargle for sore gums.

and a little bit of energetics…

Menzies-Trull describes Geum as a herb of Jupiter. This energy, he describes as providing a soothing warmth to the stomach and intestines.

Being governed by Jupiter, Culpeper described Avens or Herb Bonnet (as he called it) as comforting the heart, good for indigestion, strengthening and warming the stomach and a cold brain! He recommended drinking as a decoction in the springtime to open obstructions of the liver. He also recommended it as a prevention against the plague and other poison! Indeed he said “it is very fit to be kept in every body’s house.”