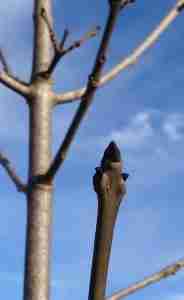 At this time of year there is less variety of plant life. However, whatever the season thankfully we always have the trees.

The European ash, or common ash, is one of the easiest trees to identify in winter with those black velvet buds and ‘keys’ (see images).

The Oleaceae contains mostly trees and shrubs such as the European ash, olive and privet. Jasmine is also in this botanical family.

For the bitings of venomous beasts, Culpeper advised using the young tender tops and leaves taken inwardly and applied outwardly. Dropsy and “to abate the greatness of those that are too gross or too fat” were treated with a small quantity of distilled water every morning. Decoctions of leaves in white wine he recommended to break and expel stones and cure jaundice. It is not clear where the stones are though I would presume, based on the jaundice reference, the gallbladder? 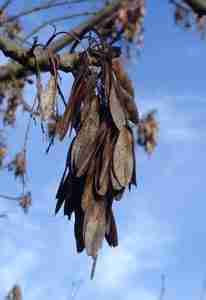 The bark he used instead of leaves in winter time. Interestingly ash keys, usually also found in winter, he used for stitches and pains in the sides from wind and for removing stones by provoking urine. One assumes he refers to kidney stones here. He noted keys easily kept all year.

Culpeper added he could justify all, one assumes from personal experience, except for the bitings of venomous beasts. Whether these venomous beasts were mythical creatures such as werewolves or more likely snakes who knows? However, I guess they were few venomous snakes (or beasts) in Culpepers 1650’s London as he had never had cause to try it!

Barker notes its use as a litholytic in Renaissance times, pre-Culpeper. An indispensable timber. Everything from furniture, spears and walking sticks, carts and oars were made from the ash. A tree of magic and mythology.

David Winston, an American herbalist, lists the American or white ash (Fraxinus americana) in the American Extra Pharmacopoeia. Both Cherokee and eclectics uses included for pelvic congestion and uterine fibroids.

This well known tree was not included in my own herbal training. Leaves and winged fruits are utilised in modern herbal medicine. As is bark, from two to three year old twigs, and the sap too (Barker).

Leaflets are harvested without the petiole while young, ideally before the end of June. Harvest bark, from young twigs, in April. Leaves are prepared as infusion and the bark a cold maceration followed by infusion. A syrup of fruits is advised.

Barker describes the European ash as a diuretic and anti-rheumatic. Beneficial for rheumatism, gout and oedema. As a febrifuge, for fevers, fruit or bark are used. He describes it a mild laxative although adds not the bark. It is also astringent, here, he notes mainly the bark. Leaves are chewed for bad breath. Barker suggests combining with some peppermint or lemon balm leaves.

Menzies-Trull lists many of the same indications as Barker; halitosis, fevers, oedema, gout and rheumatism particularly highlighting it a uric acid eliminator. In addition, he describes ash a slow and persistent remedy.

Similar to the American ash, Menzies-Trull, describes the European ash as toning the uterus and indicates ash for uterine prolapse, endometriosis with oedema and enlarged cervix.

Coumarins, flavone glycosides, resins, tannins and vitamins are included constituents listed by Barker. The resins and tannins are probably highest in the bark and relate to the astringent action.

and a bit of research…

A German study from 1995 investigated the pharmacological properties of a compound used as an anti-rheumatic. It contains a combination of Populus tremula, Solidago virgaurea and Fraxinus excelsior (European ash). The team conducted various studies. They noted little previous research into Fraxinus excelsior itself however, they found its coumarin components to have a variety of pharmacological properties. The combination of the three herbs was comparable to non-steroidal anti-inflammatories (NSAID’s) without the side effects (von Kruedener, 1995).

and finally some energetics…

Governed by the sun (Culpeper). Both Cherokee and eclectics described the bark energetically as bitter and acrid (Winston).